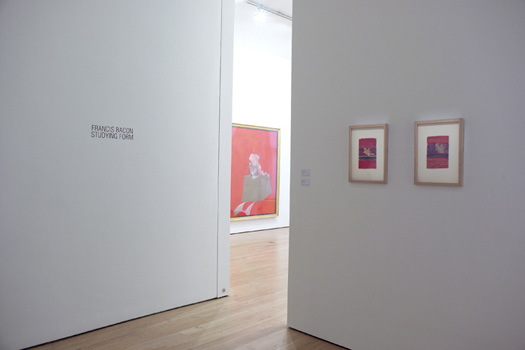 Since David Sylvester was too unwell to deliver Francis Bacon and The Nude in person, he wrote down the lecture and tape‑recorded it: the transcript is published here for the first time. I was unable to attend the transmission of David’s talk in Dublin, and did not see the text until after my book, In Camera: Francis Bacon was on press. Had I done so, I would either have modified, or expanded, my readings of three decisive Bacon paintings. I saw David fairly frequently towards the end of his life, and although we talked at length about everything from Flemish tapestry to Barnett Newman, to my regret we seldom spoke about Bacon. In the hope that it may inform both my own text and David’s, I shall begin this essay by instigating an unrealised dialogue.

In his analysis of Study from the Human Body, 1949, Bacon’s first (extant) painting of the nude, Sylvester remarked on the significance of the example of the pastels of Degas for the striated treatment of the curtain the ‘shuttering’ as Bacon termed it. He cited an interview he had conducted in which Bacon explained that by using shuttering, ‘the sensation doesn’t come straight out at you but slides slowly and gently through the gaps’: this was a lucid description of a technique of optical disturbance, one of Bacon’s tactics for obstructing narrative and destabilizing and fragmenting his figures, and a strategy that is partly in conflict with his professed aim to achieve the ‘brutality of fact.’ Almost as an aside, Sylvester mentioned the conviction of Bacon’s cousin, Pamela Firth, that in Study from the Human Body the figure’s truncated arm referred to her husband, Lt Col Vladimir Peniakoff (of Popski’s Private Army renown), who had lost his left hand in battle. While this is perfectly plausible, I would propose another, and perhaps in Bacon’s thinking prior, quote (consistent with Bacon’s synthesizing of multiple quotations): the figures at the left and right sides of Matisse’s Bathers by a River, 1909‑16. Sylvester believed that the same Matisse had informed Bacon’s Painting 1950, a painting for which I proposed a wider range of ‘sources’, including a different Matisse: on this point we may both be right.

Regarding Triptych – Studies of the Human Body, 1970, Sylvester confessed his theory that the source for the figure in the right‑hand panel was Caravaggio’s Narcissus, was ‘pure supposition’; however, having absorbed the remarks on this painting in Looking Back at Francis Bacon, my subsequent comparison of the figure’s prominent right shoulder with Caravaggio’s St John the Baptist appears to strengthen the link. Francis Bacon and the Nude proved to be Sylvester’s final contribution to Bacon studies. In the course of it he also discussed one of the paintings in the present exhibition, Lying Figure: No. 2, 1959, which he related, convincingly, to the two Tate gouaches; indeed he linked the gouaches to all of the paintings of lying and reclining figures that Bacon painted between 1959 and 1961. Since he also believed that, for these figures, ‘no prototype in art or photography has been traced,’ presumably he was convinced neither by the arguments for the sculpture of Rodin nor the fragmented statues of antiquity as significant precedents for their extravagantly and unconventionally splayed limbs.