Jessie Lightfoot with Francis' sister Ianthe and brother Edward, ca. 1920 © Courtesy The Estate of Francis Bacon and the Knott family

Jessie Lightfoot was born the daughter of a farmer in the small hamlet of Burlawn, Cornwall, on 28 June 1871.1 The lifelong spinster was Francis Bacon’s childhood nanny, a vital emotional pillar for the emerging artist and a loyal partner in crime, who lived with him for most of the time until her death in 1951. When Bacon’s long-term partner Eric Hall entered his life around 1932, he completed an unusual constellation of surrogate parents which was to provide stability and encouragement for Bacon for almost 20 years.[2]

Lightfoot was registered as living with the Bacons at Cannycourt in County Kildare, Ireland, in 1911, where she was hired as ‘nurse, domestic servant’, and she was with the family when they relocated to London during WWI.[3] By the time the Bacons no longer had need for her, Lightfoot was in her late fifties and, with her eyesight failing and the country slipping into economic depression, she struggled to find a new post.[4] Francis, however, took care of her and as soon as he had settled in London in 1929, she moved with him and his partner Eric Allden into a maisonette at 54 Vincent Square, Pimlico.[5] During the following years she lived with him in several rented places, acting as a housekeeper and cook, but taking on more eccentric duties, too.[6] For the excitement of it, and to top up his funds, Bacon sometimes resorted to dubious activities and petty crime.[7] For example, he advertised himself in The Times as a ‘gentleman’s companion’, tellingly under the name ‘Francis Lightfoot’, and it was his old nanny who looked through the replies to choose the most lucrative looking candidate for a meeting.[8] Lightfoot herself would shoplift whenever they were hard up.[9] In 1934 she worked as a cook for Bacon’s friend, the designer Arundell Clarke, and until 1939, she ran a lodging house at Barnabas Street, Pimlico, where Bacon lived in 1935.[10]

In 1943, Bacon moved to 7 Cromwell Place, probably with Lightfoot in tow.[11] Kathy Sutherland, wife of the painter Graham Sutherland, remembered the former studio of the Pre-Raphaelite painter John Everett Millais as a big but messy place where ‘the salad bowl was likely to have paint on it and painting to have salad dressing on it’ but where, nevertheless, food, wine and conversations were excellent.[12] Lightfoot was an inherent part of the place, who, bizarrely, slept on the kitchen table during the day.[13] The artist and writer Michael Wishart, Bacon’s friend and a regular visitor of Cromwell Place, painted a vivid picture of her personality. According to him, Lightfoot ‘considered Edward VIII a disgrace because he failed to become king, and […] was a fervent advocate of capital punishment’.[14] Further, she ‘looked forward to the re-erection of the gibbet at Marble Arch and the first offender to be hung, drawn and quartered would be the Duchess of Windsor’.[15] Wishart said she was ‘very like a nanny, a Victorian spinster’, and half-blind, although, as Daniel Farson remarked, ‘it was said that she could tell the difference between a ten-shilling and a pound note instantly’.[16] In spite of that, she tolerated and was immersed in Bacon’s own extravagant lifestyle. Bacon and Hall regularly staged illegal gambling parties during which she acted as hat-check girl and lavatory attendant, diligently collecting tips from the visitors.[17] When, after the war, Bacon travelled with Hall to Monaco for extended periods of time, he took Lightfoot with him. ‘Francis painted all day, gambled all night, and the nurse knitted in the sun’, Bryan Robertson remembered of their life on the Côte d’Azur.[18]

Bacon looked after Lightfoot to the last and was present at her death at 7 Cromwell Place on 13 April 1951.[19] He was devastated by the loss, which triggered a period of emotional instability.[20] Unable to stay at Cromwell Place, he sold it to Robert Buhler but soon regretted this decision.[21] During the following years he restlessly changed addresses until eventually settling in 7 Reece Mews in 1961.[22] No portraits of Lightfoot are known to survive but both her relationship to Bacon and even her looks may reverberate in his appropriations of the screaming woman from Eisenstein’s silent movie Battleship Potemkin, 1925, which he misidentified as a children’s nurse.[23] 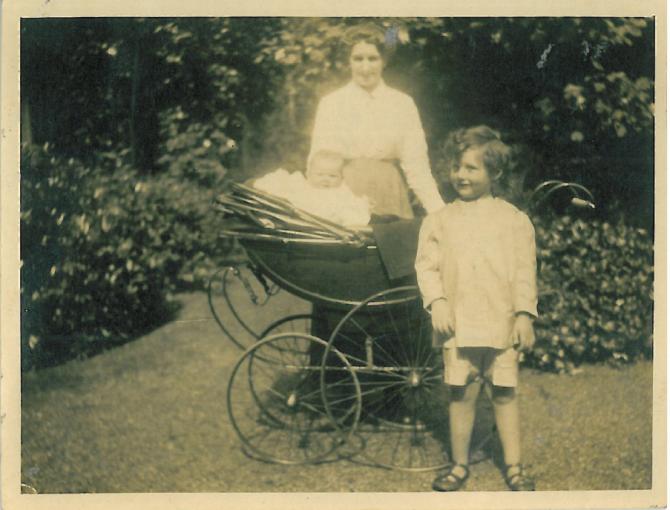 Jessie Lightfoot with Francis' sister Ianthe and brother Edward, ca. 1920 © Courtesy The Estate of Francis Bacon and the Knott family