Important Paintings from the Estate (1998) 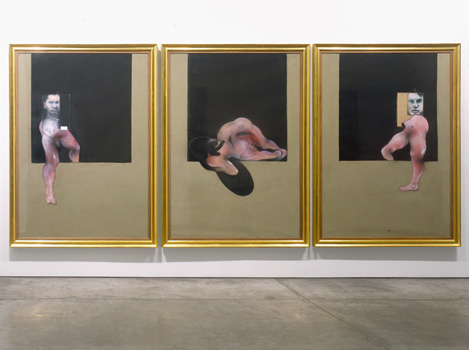 Francis Bacon’s first painting of a pope was Head VI of 1949, a head‑and‑shoulders image which already presented the inspired conflation between the Velázquez portrait of Pope Innocent X and the close‑up of the nanny shrieking from Eisenstein’s Battleship Potemkin. While that conflation was often repeated, not all Bacon’s popes have open mouths, nor are these necessarily shrieking. There are times when the open mouth looks as if it is silent, is the mouth of an asthmatic trying to take in air or that of an animal in a threatening or defiant pose.

Furthermore, not all Bacon’s popes are based on the portrait of Innocent X, though most of them are. He had a tremendous drive to make variation after variation on this image. Velázquez was his preferred painter and this particular portrait could have been expected to have an especial appeal to him in that the paint is freer and looser and the whites more flickering than in any other Velázquez, almost as in a Gainsborough. But Bacon never in fact saw the work in the original, not even when he spent some weeks in Rome in 1954; he knew it only in reproduction, and reproductions convey no hint of its freedom of handling.

Was Bacon, then, drawn to this particular Velázquez by its subject? The Pope is Papa and Bacon had very strong feelings about his father. ‘I disliked him, but I was sexually attracted to him when I was young. When I first sensed it, I hardly knew it was sexual. It was only later, through the grooms and the people in the stables I had affairs with, that I realized that it was a sexual thing towards my father.’ Painting popes in their isolation could well have been, among other things, a way of bringing back his father, of spying on him, of demolishing him. Bacon believed or said merely that the Velázquez Pope was ‘one of the greatest portraits that have ever been made’ and that he was obsessed by it because of ‘the magnificent color of it.’ But in the forties and fifties he toned down the magnificent scarlet to a muted purple. It was not until the sixties that he was able to bring himself to match the scarlet.

Of all the innumerable popes, the greatest, it seems to me, were painted at the beginning—Head VI and then the earliest of the versions in which the Pope is shown seated, Study after Velázquez, 1950. Behind the Pontiff is a heavy curtain with deep parallel folds; a second curtain, attached to a curved rail, is spread out across the foreground. This curtain, of course, alters the composition radically. The Velázquez is a seated three-quarter length portrait, cut off at the knees, and therefore still a medium close‑up. This Bacon Pope is cut off just above the knees, but then the foreground curtaining intervenes and, animated by the thrust of its radiating folds, pushes us back and creates a gap like an orchestra pit between audience and scene. We are made to keep our distance.

The figure is at once monumental and evanescent. Its majestic composure is frayed at the edges by a flicker that could mean both an emanation of its own nervous energy and a bombardment by pressures in the atmosphere. The mouth is immense in power and anguish. As we zoom in, it threatens to engulf us, to swallow us up. This is a mouth that is breathing in, or trying to. It is uttering no sort of cry. It is open and silent.

Magnificent and vulnerable, this personage has the withdrawn look of many Velázquez portraits, for instance, of the late head‑and‑shoulders of Philip IV in the National Gallery, London—and not only the withdrawn look but the elongated Bourbon features. Velázquez is also there in the beautiful dryness of the paint. For me, this picture’s closest rival among the three‑quarter‑length popes is the gorgeous version done in 1953 which belongs to Des Moines, one of those Bacons that is peculiarly evocative of Titian, a painter in whom Bacon was not greatly interested. When we were talking about Titian once, he said: ‘When I think of the Pope painted by Velázquez, of course he wanted to make it as much like a Titian as he could, but in a curious way he cooled Titian.’ It was this cooling that made Bacon love Velázquez as he did.