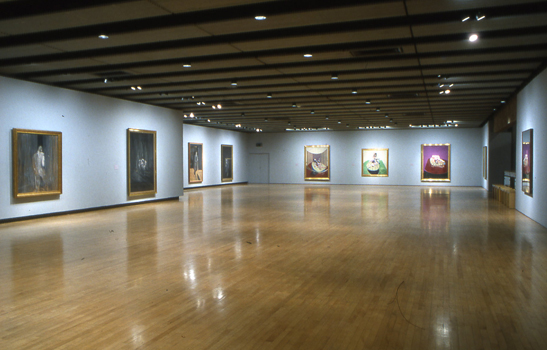 Bacon has lately survived exposure to two vast museum spaces that could have been killers—the Centre Pompidou in Paris and the Haus der Kunst in Munich. They brought out a grandeur in the work that had tended to be less manifest than its expressiveness and its vitality. Some paintings seemed to possess a Matissean severity and serenity that had not previously been suspected. Canvases hung in the two daylit areas of the Paris showing had a vibrancy that made Bacon look as much a colourist as a dramatist: the grisaille paintings of the late 1940s and early fifties had a hushed lyricism; the monumental triptychs of the 1970s seemed to derive their power from their abstract qualities: in the great black triptych recording George Dyer’s death alone in his hotel room, this document about pain–the protagonist’s pain, the artist’s pain–what mattered most was the density and incisiveness of the black and maroon quadrilateral shapes.

Where the constructed setting in Paris provided a relatively neutral modernist framework for the paintings, the grandiose neo‑classical spaces at Munich were as much a theatre as a set of galleries. You saw a picture in another room through a portal on which it was centred and it looked like a Velázquez hanging in the Prado.

Bacon’ s choice of pictures from the National Gallery’s collection for his exhibition in 1985 in the series called The Artist’s Eye showed a strong bias towards serene and monumental works such as Masaccio’s Virgin and Child and Seurat’s Baignade. He did have a still life and a landscape by van Gogh, but there was no figure‑painting that was at all expressionistic or even vigorously dramatic: Rubens’ Brazen Serpent had been on the list of possibles but was eliminated. Another artist left out in the end–in this case one who would have fitted in–was Raphael. He was left out because there was no particular example that Bacon loved enough, but, had the NG’s collection included the tapestry cartoons, which he often went to see at the Victoria & Albert Museum, I feel sure that The Miraculous Draught of Fishes would have been in the exhibition.

Something in the hang came as a revelation to me. In the middle of the best wall Bacon placed three great nudes: Degas’ pastel, Woman Drying Herself in the centre, flanked by Velázquez’ Rokeby Venus and the Michelangelo Entombment. Degas was the marriage of Velázquez and Michelangelo and thus Bacon’s key painter. It was a revelation because of the way it made an unwitting art historical point, not because there had ever been any doubt about how crucially those three artists had influenced Bacon. For example, in his earliest surviving image of a nude, Study from the Human Body, 1949, the treatment of the spine clearly reflects his fascination with how the top of the spine in Woman Drying Herself ‘almost comes out of the skin altogether’, as he put it, making us ‘more conscious of the vulnerability of the rest of the body.’ In other respects this particular Bacon nude is less like a Degas than many others in that the realisation is more smudgy and atmospheric and evanescent, less incisive, than in later works. It is wonderfully tender and mysterious in its rendering of the space between the legs and its modelling of the underside of the right thigh. Its use of grisaille is breathtaking. None of Bacon’s paintings puts the question more teasingly as to whether he is primarily a painterly painter or an image‑maker. Does this work take us by the throat chiefly because of its lyrical beauty or because of the elegiac poignancy of its sense of farewell?