Francis Bacon, Triptych Inspired by the Oresteia of Aeschylus, 1981 © The Estate of Francis Bacon. All rights reserved. DACS London

‘I tell you what I really read: things which bring up images for me. And I find that this happens very much with the translations of Aeschylus.’[1] 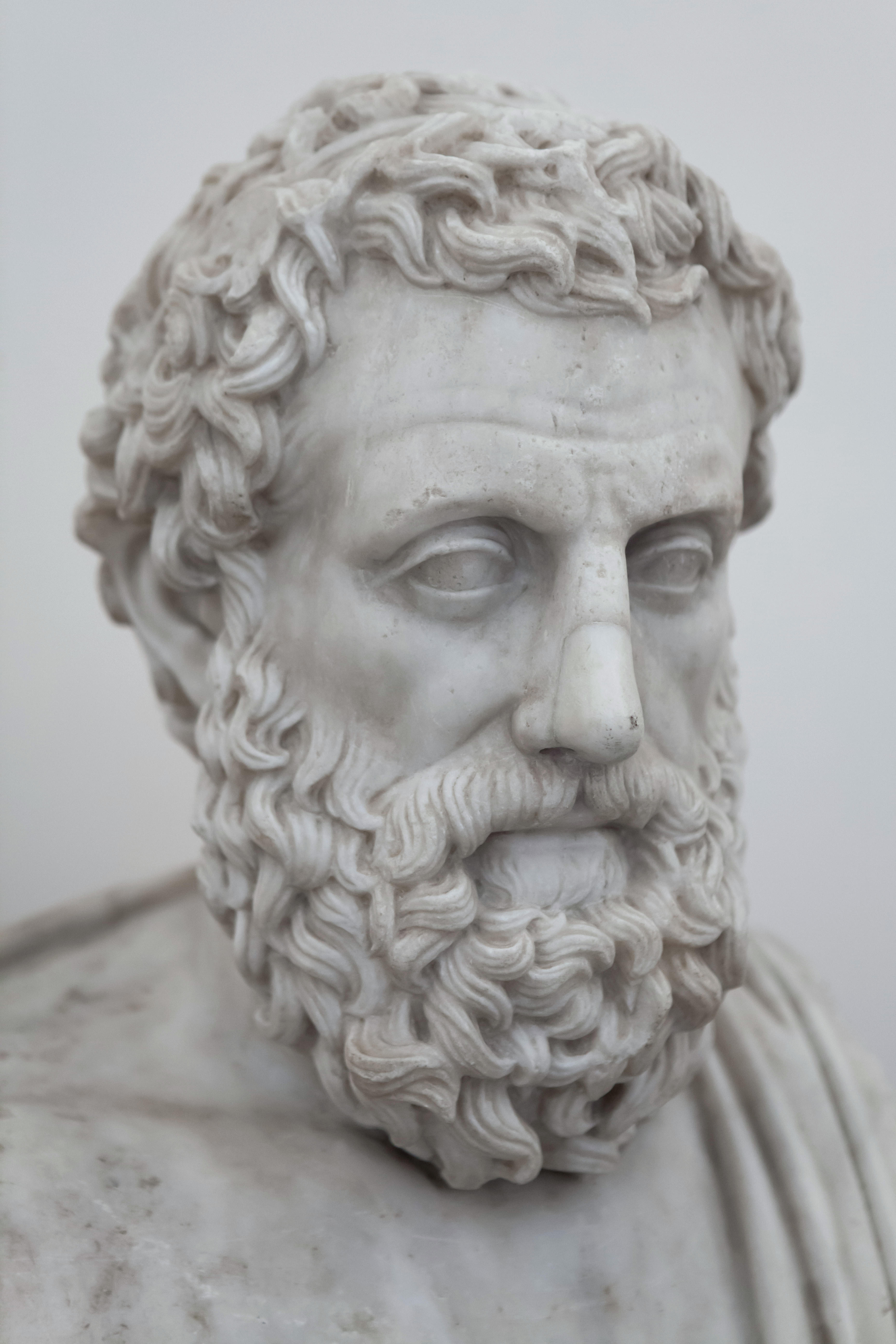 Marble bust of ancient Greek tragedian Aeschylus (525-456 BC). Roman copy from the Augustan age after a Greek original from circa 340-330 BC from the Farnese Collection on display in the National Archaeological Museum in Naples, Campania, Italy © Azoor Photo Collection / Alamy Stock Photo

The playwright Aeschylus was born in Eleusis near Athens in about 525 B.C.[2] We know that the noble fought in the battle of Marathon in 490 B.C. and was present at the battle of Salamis in 479 B.C.[3] He had two sons who were also playwrights.[4] From circa 472 B.C., Aeschylus worked for extended periods of time in Sicily and died there, in the city of Gela, in about 456 B.C.[5] Legend has it that he was killed when an eagle dropped a turtle on his bald head in an attempt to break its shell, confusing it for a stone.[6]

Allegedly tasked by the God Dionysus himself, Aeschylus started writing drama in the 490s B.C. and subsequently produced around 80 plays.[7] Only seven survive today, the best-known being The Persians, Prometheus Bound, The Seven Against Thebes and the Oresteia. Arranged in tetralogies – ‘a set of four plays presented together and related in plot’[8] – they revolve around historical events, ancient gods and myths. Their most celebrated feature is their visual and visceral, sometimes synaesthetic language, which has been described as ‘unique and almost overwhelming’,[9] used in a style which is ‘bold, energetic, and sublime, full of gorgeous imagery, and magnificent expressions’.[10] Aeschylus’ plays usually premiered at the annual drama contest in the Theatre of Dionysus at the foot of the Acropolis in Athens[11], in which the author first took part in c.498 B.C. and that he won 13 times.[12] 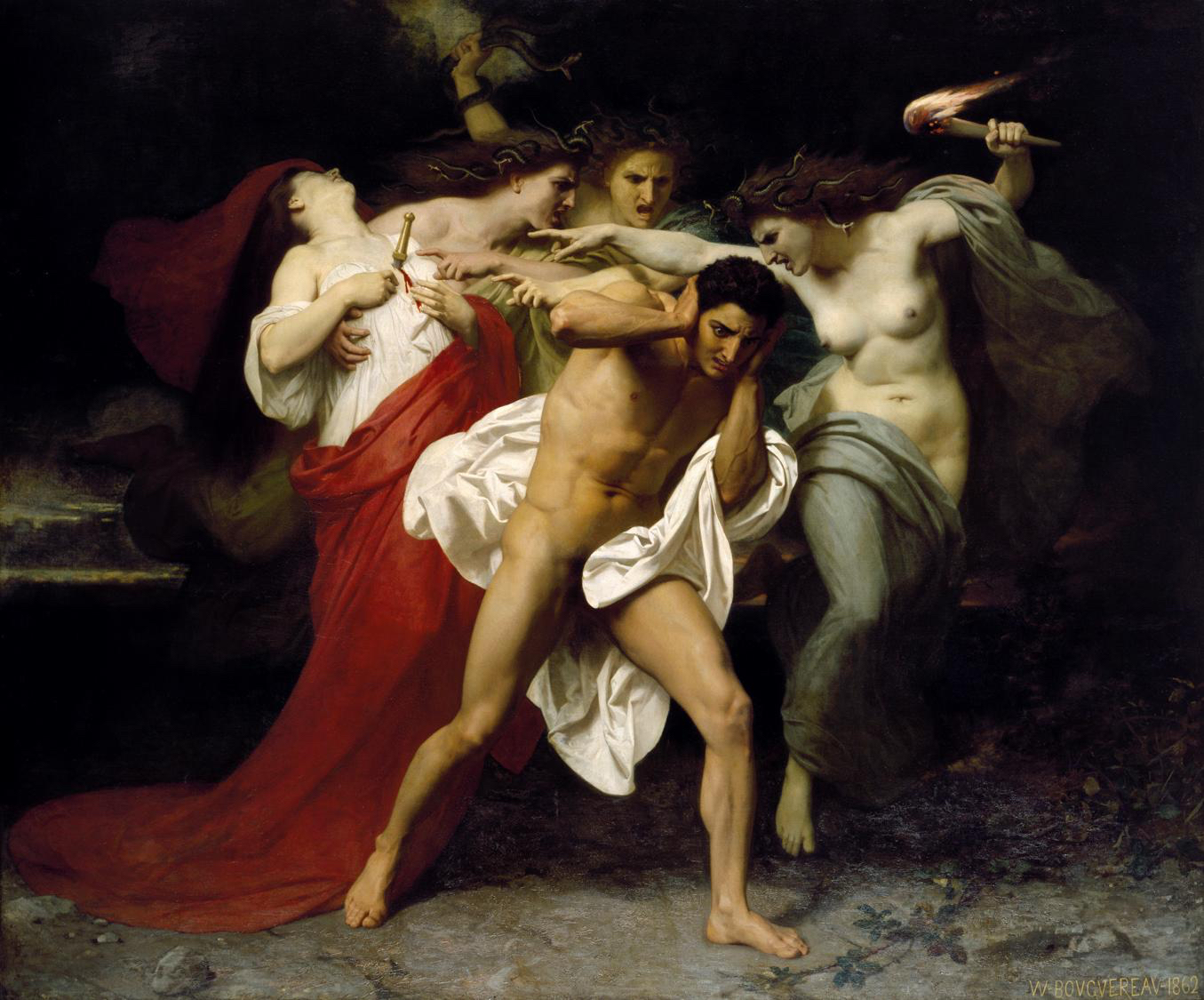 William-Adolphe Bouguereau, The Remorse of Orestes or Orestes Pursued by the Furies, 1862, Chrysler Museum of Art / Public Domain

Bacon’s interest in Aeschylus focussed on the Oresteia. In the violent story, Orestes kills his mother Clytemnestra to avenge her murder of his father Agamemnon, because the king had sacrificed their daughter Iphigenia to the Gods to assure his victory in the Trojan War. After being haunted by the Furies for his sin, Orestes is finally acquitted by a court in Athens. If the ‘menace and foreboding […] and the imminence of higher and decisive powers’ in Aeschylus attracted Bacon,[13] his own difficult relationship with his parents was probably a factor in his identifying with the family drama.[14] Bacon may first have encountered the Oresteia when he attended the premiere of T. S. Eliot’s modern reinterpretation, The Family Reunion, in 1939,[15] but it was W. B. Stanford’s book Aeschylus in his Style. A Study in Language and Personality, published in 1942, which formed the linchpin of his life-long preoccupation with it.[16]

It was arguably Stanford’s translations which ‘brought up images’ for the painter. The line ‘the reek of human blood smiles out at me’, an example of synaesthesia, which was frequently quoted by Bacon, is evocative of the grinning figure in the centre panel of Three Studies for Figures at the Base of a Crucifixion, 1944.[17] References to the Greek tragedy were generally associative and loose: after all, as Bacon insisted, he did not want to illustrate texts.[18] Instead, as has been remarked in relation to Triptych Inspired by the Oresteia of Aeschylus, 1981, the panels ‘allude to major issues of the trilogy and their theatrical representation, particularly bloodshed, but without confinement to individual scenes or their sequence’: no specific event from the play can be identified in this, or any other Bacon painting.[19] As Bacon explained, he ‘tried to create an image of the effect it [the Oresteia] produced inside me’.[20]

Francis Bacon, Triptych Inspired by the Oresteia of Aeschylus, 1981 © The Estate of Francis Bacon. All rights reserved. DACS London

Bacon most explicitly visualised the Furies in Three Studies for Figures at the Base of a Crucifixion, which, by his own account, were ‘sketches for the Eumenides’; these appear as a headless, hovering creature, in several works, including Study for the Eumenides, 1982, and as the shadow in the centre panel of Triptych May-June, 1973.[21] In addition, the onlooking figures in works such as Study of Nude with Figure in a Mirror, 1969, recall the characters of the watchmen[22] and the figure in the centre panel of Triptych, 1976, may be interpreted as Agamemnon.[23] As is typical for Bacon’s visual and literary adoptions, allusions to the Oresteia were rarely exclusive. He claimed that Triptych, 1976, drew on Joseph Conrad’s Heart of Darkness, 1899, as well as Michel Leiris’s Frêle Bruit, 1976,[24] and while the profile of the Fury in the left panel of the Three Studies draws on a photograph of a séance published in the book Phenomena of Materialisation, that in Study for the Eumenides and related paintings is based on a photographic reproduction of a diving pelican.[25]

[9]William Bedell Stanford, Aeschylus in his Style. A Study in Language and Personality, Dublin: at the University Press, 1942, Preface, no page numbers, and p.106-110.